In Kharkiv the Security Service of Ukraine (SSU) has stopped an attempt to transport supporters of the international terrorist organization “Islamic State” from Syria through Ukraine to Western European countries, reported the press service of the SSU (UK).

The organizer of the illegal transportation was a citizen of a neighboring country, who illegally lives in Ukraine and is suspected in possible involvement in terrorist activities by law enforcement agencies. 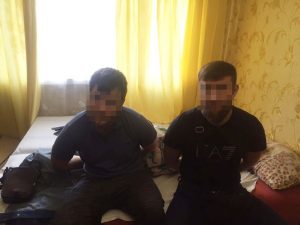 On suspicion of committing the crime security forces detained the organizer and two potential terrorists. The investigation is in progress.

This is not the first time when in Kharkiv detained supporters of ISIL. On April 11, law enforcement officers detained a student of 2nd course of Karazin Kharkiv National University originally from Libya. After a search of the rented apartment of foreigner, security forces found there a mechanism UZRGM-2 (Universal Igniter, Hand Grenade), the F-1 grenades, as well as ISIL symbols and ideological literature.