The work, completed March 23, is part of “The Source of Neutrons” project, was endorsed during a visit to Kharkiv by Ukrainian President Petro Poroshenko and US Ambassador Geoffrey Pyatt.

The President of Ukraine noted the opportunities provided by the initiative for the country: from scientific-technological researches and developments in medicine and industry to complete resolution of problems in the field of nuclear energy.

The presidential press service reports that Petro Poroshenko believes “The Source of Neutrons”, developed with US support, demonstrated the importance of cooperation with countries in matters of nuclear safety and non-proliferation of nuclear weapons. 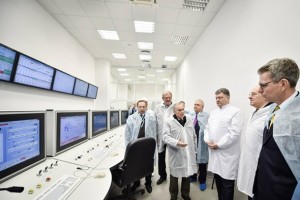 Poroshenko noted the huge contribution by Ukraine to the world’s nuclear safety program. The country renounced its nuclear arsenal which, by its power occupied the third position in the world, and is actively cooperating with various international organizations.

The President said the project is a “first nuclear installation of world significance developed by Ukrainian specialists during the years of Ukraine’s independence.”

We also recommend to read another article Future patrols show President their tactics.