Home Kharkiv Who uses a smartphone in Ukraine in 2016?

More Ukrainians use a smartphone than ever before, it has been revealed.

Every third Ukrainian uses a smartphone with a touchscreen compared to only one in four in 2015, reports Kyiv International Institute of Sociology in a “smartphonisation” study of Ukraine, commissioned by mobile marketing agency LEAD9. Analysts have also identified a portrait of a typical smartphone user in our country,

Analysts have also identified a portrait of a typical smartphone user in our country, AIN reports (RU).

The availability of smartphones significantly varies depending on the age category. Every second Ukrainian between 18 to 50 years has one. For those under 30, this reaches 65%, while only 5% of Ukrainians over 60 years have such devices.

“The typical user is a young man, no older than 40, with higher education, living in a medium or large city of Ukraine,” says Nazar Grynyk, director of mobile marketing agency LEAD9.

Smartphones are more common among residents of large cities (42%), while in smaller towns only 28%.

Smartphones use approximately the same number of men and women. At the same time among the users more people with higher education: 47% vs 30% of Ukrainians with secondary special education. 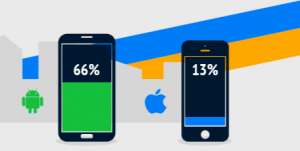 Two-thirds of smartphones run on the Android operating system. The prevalence of other systems does not exceed 13% (iPhones). Over the past year use of Android system slightly grew, while Windows collapsed to only 2%.