American filmmaker of Ukrainian origin Damien Kolody presents for Kharkivens the documentary film “Freedom or Death” about the events on the Maidan during the Revolution of Dignity, reports the Gorodskoy Dozor (RU). 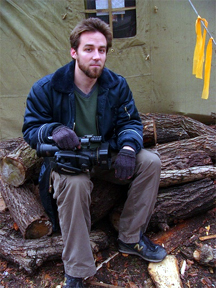 Damien Kolody ventures to the frontline of the rebels to explore its origins and its potential consequences for the people of Ukraine. His film exposes the shocking truths behind this important moment of European history.

“They were not fighting for any particular politician. They were fighting for the future of their country; for what they believe freedom is,” he explains.

The director will personally present a picture, and answer the questions after the show.

BACKGROUND: In 2016, the film won the audience award at the Phoenix Film Festival, and also won in the category “The Best Documentary” at the Independent Film Festival in Miami. In addition, Damien Kolody has made the film “Orange Chronicles” dedicated to the events on the Maidan during the Orange Revolution.

We also recommend you read: Film about retreat of “Berkut” from Maidan will be shown in Kharkiv, Kharkiv film studio will shoot a film, Danes to produce musical about Kharkiv IDPs.