Publishing house “Vivat” will release “Hiding-place. Diary in letters”- notes of a 13-year-old girl, who was bound to experience the oppression and extermination of the Jews during the Second World War, Mykharkovinfo reports (RU).

Anne Frank kept a diary from June 12, 1942 to August 1, 1944. First, she wrote only for herself: about peers, relationship with her parents, and constant and all-consuming fear of arrest, because the girl and her family were Jews, who were hiding in an abandoned house in Amsterdam.

In spring of 1944, she heard on the radio speech of the minister of education of Netherlands Bolkenshtein. He said that all the evidence of Netherlanders in period of occupation should become public property. Impressed by these words Anne decided to publish a book after the war, the basis of which would be her diary. 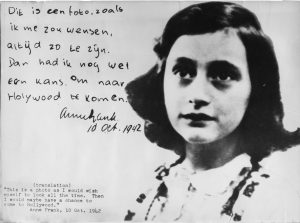 The girl was not destined to see her diary published. After August 4, 1945 all eight Jews who lived more than two years in the hiding-place, were arrested. Anne died in a concentration camp Bergen-Belsen when she was only 15. In winter of 1945 in a concentration camp because of the outbreak of typhus epidemic died her sister Margot. On April 12, 1945, British troops liberated the concentration camp, where the girls were located.

The book “Hiding-place. Diary in letters” translated into more than 60 languages, in Ukrainian was published in the ’90s. The new publication is complemented by photos from the album of Anne Frank.

We also recommend you read Book presentation about the Donetsk airport will be held in Kharkiv, In Kharkiv presented stress-relieving book and How many book lovers live in Kharkiv?