The organizers of the grand musical event U-Park Festival, which will be held on July 6 and 8 at Kyiv’s stadium Olympiiskiy where will perform the greatest rock musicians of our time – RHCP, Muse, Hurts, The Kills – announced who will open the second day of the festival. 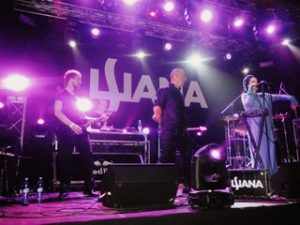 “Ukraine is rich in talents that are worthy of performing on one stage with such giants of world music like Muse and RHCP. Therefore, it was very important the Ukrainians open the festival. We listened to dozens of Ukrainian rock bands, but SHANA became for us a finding,” commented the organizers.

SHANA began in 2015 and immediately reached a high level. In a relatively short time the band managed to record their debut album “Pray” on TRIXX studio in Berlin, where they worked such eminent musicians like Rammstein, Tricky, Nino Katamadze and others; release it at the largest Ukrainian label Moon Records; shoot a few clips and present acoustic program in Kharkiv.

“U-Park Festival is an important and joyful musical event for the country. Special thanks to the organizers, which enable young bands to perform on one stage with world-class musicians,” said leader of the band SHANA, Katarina Leonova.

Premier of the SHANA’s video clip: