Home Kharkiv Malyshev Plant will be featured on BBC

As specified in the plant, recently the crew of the channel visited the enterprise. Reporters were shown how to collect tanks and other equipment. 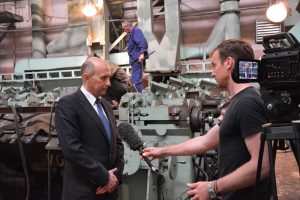 “The activity of our company – the leading plant in tank building field and one of the most powerful and iconic companies of Ukrainian defense industry – attracts more and more attention of the general public and in our country, in the near and far abroad,” noted the enterprise.

According to the company, the plant maintains created and developed here tanks “Bulat” and other armored vehicles, as well as repairs damaged equipment in the ATO area. In the near future Malyshev plant plans to supply the Armed Forces of Ukraine modern examples of armored vehicles, for instant, a tank “Oplot”.

We also recommend you read Part of tank plant to become art space and New tank engine created in Kharkiv.