A Ukrainian team of developers has launched Spottle, a new geo-messenger that is said to be mix of Foursquare and WhatsApp in one application, ain.ua reported (RU).

The app receives the user’s coordinates and shows all the places nearby in the form of a chat list. It is possible to reply any chat: you may write whatever you want: question, review or complain. Then an operator of the team deals with it. 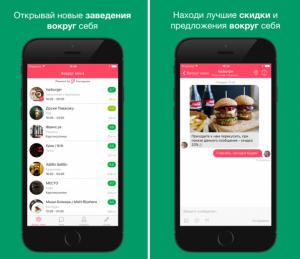 In the future it is planned that administration of locations will be responsible for chats: this function has been tested with cafe and restaurant owners in Dnipropetrovsk.

For now, twelve locations are connected with Spottle.  As of May 6, more than 7000 people have installed the app. A user can also check reviews, photos, menus, current events guide, etc.

The idea was born a year ago. “The first thing we asked of potential users by showing them mockups, painted in a free online editor. After receiving the first feedbacks, we wrote to a CEO of the American company who offered to meet and eventually became adviser of the project,” says Andrey Oleksyuk, co-founder of Spotter.

The app is free: the team plans to make profits on consumers’ statistics and analytics selling as well as targeted tools to share discounts with people within a certain radius.

We also recommend you read: Kharkivens create app to see tattoo in real-time and competitive application to Instarepost.