Actors of youth theatre Kuznetsi performed on the evening of April 7 on the central streets of Kharkiv with a “sense bearing performance”, reports Status Quo (RU).

As noted in the theater, performances were held as part of the Platform 77″ project and devoted to the anniversary of the outbreak of hostilities in east Ukraine. 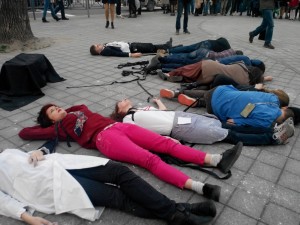 “Their main purpose was to show that a person is powerless before the violent actions of the war. It’s very important to attract the attention of Kharkiv citizens to this problem, because in the city there is a large number of internally displaced persons who need support,” stressed the theater.

BACKGROUND: Show-theater “Kuznetsi” was formed in 2014 by students of Kharkiv Kuznetsov National Economic University. The activity of the collective aimed at the formation of theatrical environment in the city and development of culture among young people.