This was confirmed by the press service of the Kharkiv regional state administration (UK).

At the same time, according to Depo.Kharkiv (RU), Yatsenyuk’s visit was postponed indefinitely with no reasons for the cancellation.

Local media reported earlier, it was expected Yatsenyuk will visit the international checkpoint “Goptivka” on the Ukrainian-Russian border and inspect the construction of defenses, including the so-called “Wall” project. 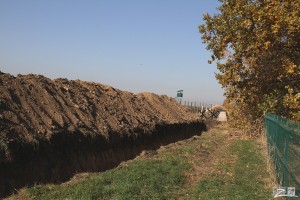 Background: Presentation of the project “Wall” the prime minister conducted in October 2014.

As stated in the report of the Cabinet, in 2015 on the border of Chernigiv and Kharkiv regions with Russian Federation built 72 kilometer wall and dug 230 kilometers of anti-tank ditches. This cost 400 million UAH to Ukrainian taxpayers allocated from the state budget.

Read more news Kharkiv joined to the signatures collection for the resignation of Yatsenyuk and Yatsenyuk and Avakov reviewed the program of criminal analysis created by Kharkivens.