The team of 18 enthusiasts develops the industry, which allows mankind to be independent of oil and gas, protect the environment and save energy consumption. 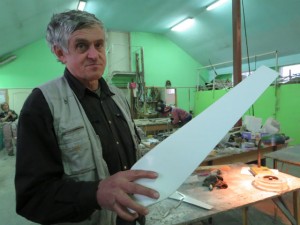 As the director of enterprise Alexander Lushnja noticed, a small company has all stages of production: from the blades to the power generators, electronics and the construction itself.

“We manufacture wind-turbine installations and related equipment, establish our own objects “on turnkey basis” and provide their services,” he said.

The cost of wind turbines starts from $400 and can reach $2000. Mainly Ukrainians who have property in settlements distant from electric networks, or who want to have an alternative source of energy, address to the enterprise “Svit Vitru”.

Over 16 years the enterprise has produced about 600 wind turbines, most of which work in Ukraine, about 30-40 installations in Russia, the others in Europe.

“Our products are also in Australia and Latin America. Even in the Atlantic Ocean in the Azores operates one,” said Alexander Lushnja.

Today “Svit Vitru” got a chance to enter the EU market. “Our mills in comparison with the Dutch and American, as a rule, beat them and cost less,” he explained.

We also recommend to read other articles In Kharkiv kick-started the production of the Crimean champagne “New World” and Kharkiv’s agricultural equipment to Poland.