On April 4 a non-govermental organisation “Civilian Self-defense” held a rally on Freedom Square in Kharkiv.

The activists held posters: “Dismiss prosecutors, corruptionists, and traitors”, “Power must be free of corruption, or follow Yanukovych’s example”, and others.

The action was attended by over 15 people, the organizers reported on their Facebook (RU).

During the event, deputy chairman of the Kharkiv Regional State Administration (KRSA) Mikhail Chernyak received an open letter to the President of Ukraine Petro Poroshenko, that sets out the activists’ requirements concerning power cleansing, reform of the prosecutor’s office and the judiciary.

Chernyak noted the chairman of KRSA Igor Rainin could not go out to the activists as he was on a visit to Kuiv. The letter says the prosecutor and the judicial systems have completely discredited themselves.

In addition, the letter contains a request to dismiss the prosecutor of the Kharkiv region Yuri Danilchenko for the fact he “supported by his actions “diamond prosecutors’ Vladimir Shapakin and Alexandr Korniyts. 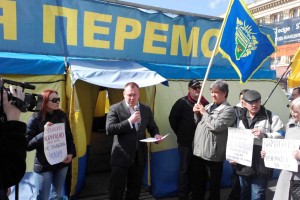