A sociological study Ukrainian Municipal Survey held by an order of the Government of Canada, showed citizens feel good about work of Kharkiv’s mayor Gennady Kernes.

The survey was conducted by a sociological group Rating on behalf of the International Republican Institute from January 20 till February 8, 2016.

It was conducted in 22 regional centers of Ukraine not under the control of Russian or Russian-backed forces, but also in Mariupol and Sievierodonetsk in the Donbas region. More than 19,000 respondents took part in the poll.

The purpose of the research was to find out how residents of Ukrainian cities feel about central and local authorities.

According to the study, 18% of Kharkivens fully endorse the work of the mayor, 51% approved mostly, 16% partially endorse, 7% disapprove. Also, the citizens support the work of executive committee of the City Council

In addition, Kharkiv is a leader in several categories: lighting, garbage collection, heating. The city also took second place on the transport infrastructure.

Most residents (71%)  are proud of their city and if they had the chance to leave Kharkiv – 68% of respondents would stay in the city, only 22% move abroad when 2% move to another city in Ukraine. Despite the conditions when Kharkivens (31%) have enough money only for food and necessary clothing and shoes, but need to save or borrow money for other purchases like a good suit, a mobile phone, or a vacuum cleaner, according to the poll. 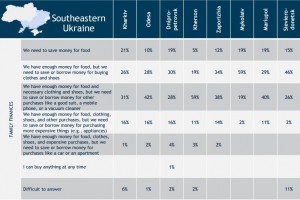 The survey results will be used to further discussion of decentralization, anti-corruption initiatives and other reforms.