Candidate of law, judge of the Kharkiv Regional Economic Court Alexander Mamaluy from March 2014 fighter in the anti-terrorist operation zone, presented the book “War Diary” and received a certificate of adviser to the head of Kharkiv Regional State Administration (KRSA) Igor Rainin.

Now Alexander continues to serve – after the second mobilization he became a sniper in the border troops.

“I was lucky to have the opportunity to read the book “War Diary” before the presentation thanks to Alexander. It should be noted that it is a genuine work above all. Today I won’t talk about all the literary success of this book. But I would say a few words about the author. We did not start this war but even centimeter of our native land won’t give anyone. This is, first of all, thanks to such people, such Kharkivens like Alexander Mamaluy. Unfortunately, he is the only officer of justice who took off the judicial robe, put on military uniform and went to the front, and did it in March 2014, the first day of the first wave of mobilization,” made a speech Igor Rainin.

The head of the region presented to Alexander Mamaluyu a certificate of advisor.

During the presentation of “War Diary” the author announced that publication of the book – a charity initiative. Part of the edition will be sent to soldiers of the 93rd Mechanized Brigade and to families of dead soldiers, another part – at the 169th training center “Desna”. Money from the sale of the rest edition will sent for help to the Kharkiv military hospital. 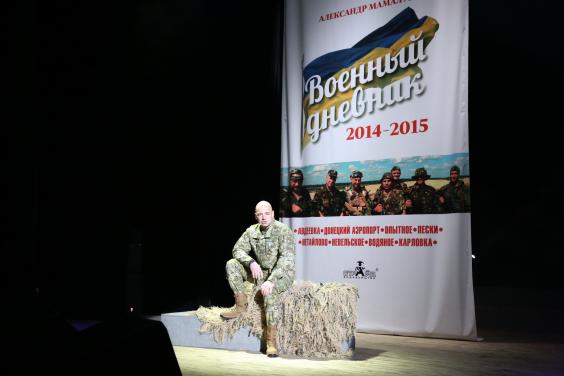