The pupil of the 4th grade of Kharkiv Teaching and Educational Complex № 45 “Academic Gymnasium” Vladimir Chub took second place in the final of the championship which was held this year in Paris.

XXIX International championship on solving logical mathematical problems was held in Paris on August 27 – 28. A qualifying round for the final competition was the All-Ukrainian championship in Vinnitsia.

“Vladimir took second place in Ukraine twice and as a runner-up he got to the final round together with the national team of Ukraine, – said Vladimir’s father Igor Chub. – There were not only representatives of the European countries but also from Canada, Russia and Algeria. He took second place in his age group, the first won the Poles. It’s the best result among all participants from Ukraine”.

Vladimir has been engaged in logical mathematics since he was 5 – his parents enrolled their child in the study group “Eureka”. At school the young mathematician is excellent pupil. 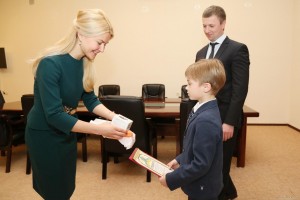 Deputy Chairman of Kharkiv Regional State Administration (KRSA) Julia Svetlichnaya congratulated Vladimir with a significant achievement and handed him the certificate of appreciation of the KRSA Department of Education and Science, and a valuable gift.

“I think that this achievement isn’t only your natural gift but also care of your parents. Therefore, I wish that you, Vladimir, move on in the same direction and achieve the goals set for yourself. We really appreciate your work and are proud that in the Kharkiv region there is a younger generation that have set for themselves ambitious goals and achieve them,” said Julia Svetlichnaya.

Despite his mathematical talent the pupil doesn’t dream to become an academic in this field. “I like the most mathematics and computer science but I want to be an architect,” said Vladimir Chub.

We also recommend to read another article A six-year-old Kharkiven named 207 capitals without any help.