Home Corruption Only this selfie was made at the session of the court on... 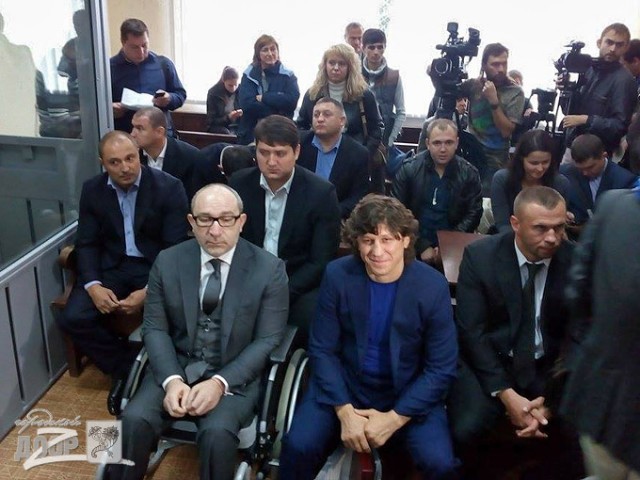 Today, on the 14th of September, a regular meeting of the court occurred in the case against the mayor of Kharkiv, Gennady Kernes, in the courtroom Poltava.

However, the defendant in the court in Poltava came: Elbrus Tedeev. He is a former MP and Olympic wrestling champion (Kernes, after injury, had to leave for medical treatment in Israel). At the trial, they took a photo for memory.

Activists also all sang a hymn, and danced, holding flags of Ukraine near the court building. They hung a series of posters on the fence rail, near mounted police. Kernes lawyer, Alexander Gunchenko, said activists expressed outrage. In addition, Kernes complained that a member of the public organization “Obschestvennaya straja” (“Public Guardian”), Valentin Bystrichenko, “sang the national anthem together with activists, was rude, laughs, and puts pressure on the court.” Judge Bystrichenko asked them to leave the premises of the court.

The aggrieved party asked the judge to begin consideration of the merits, but around 11:40, in the hall, lights went out. It is known that electricity was lost due to an accident in the area. The judge adjourned the trial until September 28 (11.00).

Recall the previous session had not been examined in fact.