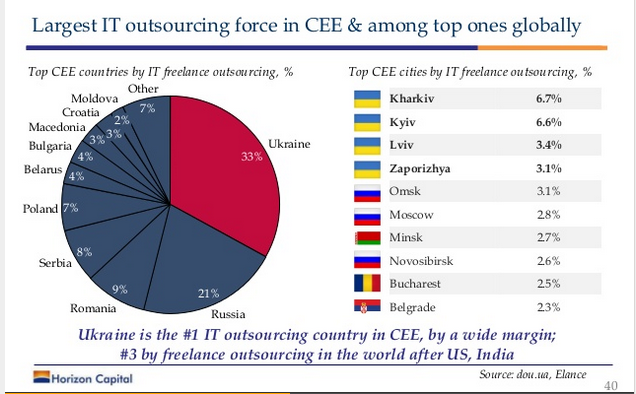 Kharkiv is the city with the largest amount of outsourcing companies in Central and Eastern Europe, while Ukraine became the #1 IT outsourcing country, by a wide margin. Our country is also on the 3rd place by freelance outsourcing in the world after US and India. Such statistics were presented by analytics from Horizon Capital.

Ukrainian programmer salaries are among the most competitive in the world. Average annual programmer salary in Ukraine is 26 000 USD and this is the 10th position in ranking after such giants as United States, Australia, UK, Canada, Israel, New Zealand, Ireland, South Africa and China.

Currently Ukraine offers foreign companies highly qualified specialists along with rather comfortable business climate for IT-outsourcing.  As result, IT outsourcing grew at 30%+ annually for over 10 years. However, some companies still face difficulties dealing with Ukrainian legislation and corruption in control organs. As we have already reported, the Kharkiv office of a big game-producing company Plarium has been searched recently.