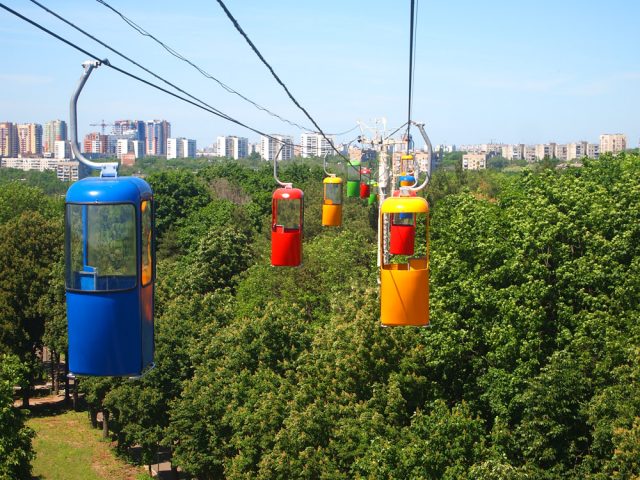 “In the urban setting of Kharkiv’s Gorky Park, this lift – built during the Soviet era – is a little different from the cable cars that swoop over wild valleys and mountain ranges. But the ride is no less emotive: there is something particularly romantic about the small, brightly coloured gondolas that look a bit like buckets dangling beneath the cable. It still offers that sense of peacefully flying over the city that only a cable car can provide,” said the report.

The cableways  from Venezuela, Canada, Switzerland, Bolivia, China, Malaysia, the USA and Brazil were also included in the list of the best world’s ropeways.

BACKGROUND: cableway in the Gorky Park connects the Street Sumska and Pavlove Pole. The total length of the route is 1,387 meters. One way trips takes 18 minutes. The height of lift cabins is from 8 to 26 m. It has cool views in the Gorky Park, Botanical Garden, the city center and the Forest Park.

In September 2013, the cableway was reconstructed: the old 128 cars have been replaced by new ones.

We also recommend you read: Kharkiv region in top 3 for foreign investments, Photo of Kharkiv entered into the top of Business Insider, Kharkiv University named best in Ukraine.