Security Service of Ukraine (SSU), together with the National Police, detained an acting SSU officer who was involved in the attack on the collector car “Privat-Bank” last week in the Kharkiv region. The Bank announced a reward of 100,000 UAH for information that helps catches the criminals. 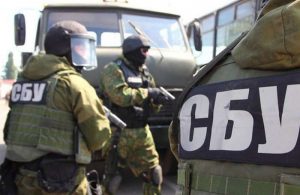 “On July 21 in the city Kupyansk of Kharkiv region organized group committed an armed attack on the collector car and stole 4.6 million UAH. Law enforcers have established the identity of one of the assailants, a lieutenant colonel of SSU in the Kharkiv region,” informs the press service of the SSU (UK). According to police, it was he who sat behind the wheel of collector car and stole it.

During searches at the place of temporary residence of the lieutenant colonel were found 50,000 USD, guns “Makarov” and “Walter” with live ammunition.

National Police opened criminal proceedings and the Lieutenant Colonel was detained. SSU promises to provide full support to the police in the investigation.

We also recommend you read Kharkiv medical volunteers came under mortar fires in the Donetsk region and Attempt of sabotage attack on the largest ammunition depot in the country.