The first official meeting of spotters will be held at the Kharkiv International Airport on August 7, Dozor reports (RU).

According to organizers, the administration of Kharkiv airport periodically organized official spotting tours for local fans of “air plane” photography. But large-scale congress of spotters will be held here for the first time. 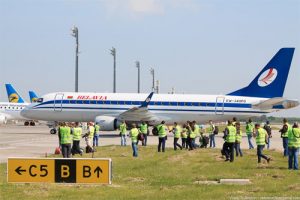 Fans of “air plane” photography will be able to go on the apron, control tower and in one of the aircraft to capture the work of the airport from inside.

As the shooting will take place in secure areas, airport holds pre-registration for participants to issue passes. To do this it is necessary to fill in the questionnaire, indicating your data and the data of your equipment.

The airport has not set limits on the type of photographic equipment and photography experience, therefore professionals spotters as well as amateurs can take part in a photo shoot in secure areas.

In European airports everyone got used to the spotters a long time ago. Some of them are even equipped with special areas for spotters with a good view of the airfield and runway.

In Ukraine, until recently, this movement was not taken seriously. Only in recent years, the relationship between Ukrainian airports and domestic fans of spotting appear some progress.

BACKGROUND: Spotting is a hobby of tracking the movement of aircraft, which is often accomplished by photography.

Other posts: Kharkiv airport to open for photo sessions and Ukrainian airports to be certified to European standards.