The signing was the result of active negotiations between the leaders of the two regions, and held during the Day of Ukraine in China project, Objective informs (RU).

Kharkiv Regional State Administration (KRSA) began to establish a relationship with one of the most developed provinces in China in January. During the visit of Deputy Head of Government of Heilongjiang Province, Lu Chunling in May formally invited the delegation of the Kharkiv region take part in the 27th Harbin trade and economic fair.

“Being in the Kharkiv region, we saw that it quickly develops. Our regions have much in common, the major sectors of our economy are also industry and agriculture,” said Chunling.

At the 27th Harbin Economic and Trade Fair, an agreement on interregional cooperation was signed by the first deputy chairman of the Kharkiv region Juliya Svetlichnaya. The document spelled out several priorities for the region fields of cooperation with China. 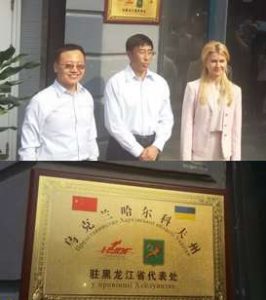 “This is definitely the industrial potential, which is interesting for China. This is science and technology. As well as new technologies, research works of the institutes in the field of agriculture as well. Another priority is the development of economic relations. In this part of the Kharkiv business will be useful opened bonded area, which allows carrying duty-free goods and then processing them in China,” stressed Svetlichnaya.

Other posts on topics: Chinese representative office to open in Kharkiv and Kharkiv officials fly to China.