A pickup point has opened as part of the project Protection of life: support for internally displaced persons (IDPs) in the Kharkiv region.

This was implemented by the Ministry of Foreign Affairs of Germany, in partnership with the German Red Cross and the Kharkiv regional organization of Ukrainian Red Cross Society. 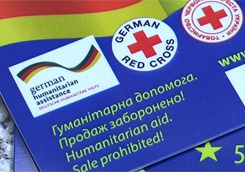 According to Objectiv (RU), this project aims to support more than 5,000 IDPs in the Kharkiv region, issuing monthly vouchers for food (600 UAH) and medicine (300 UAH) for 10 months. The project is a continuation of a previous project, which was carried out by the same organizations, from June to December 2015. Within seven months, philanthropists have given 44,000 grocery vouchers for more than 6,000 IDPs. 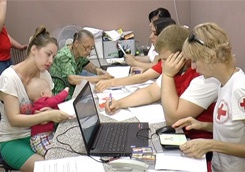 “This project is a continuation of our cooperation. According to the project, more than 5,000 IDPs will be given 50,000 food/non-food vouchers and 50,000 pharmacy vouchers,” said Haris Aliev, project manager of German Red Cross.

It issues two monthly vouchers per person – grocery and pharmacy. The voucher can be used only in certain Kharkiv stores and pharmacies. Purchases can be different except tobacco products and alcohol. Humanitarian aid is intended only for vulnerable populations.

In general, the German government through the Red Cross handed over Ukrainian IDPs humanitarian aid in the amount of about 5.5 million EUR.

Feel free to check our recent posts on topics: IDPs will pay 3 times more for housing, Social benefits for IDPs are back and IDPs protest against bureaucracy.