On June 20 annually celebrate International Day of Action for Elephants in Zoos. Kharkiv zoo decided to hold a festival dedicated to the elephants on June 18, Status Quo informs (RU).

In the program of the festival is a festive meal for elephants, the story about the elephants, problems of its preservation and the importance of zoos in this case (near Tandy enclosure). There will also be a concert-congratulation of children’s art collectives (near the statue of Ganesha) and the performance of young naturalists.

There will also be a concert-congratulation of children’s art collectives (near the statue of Ganesha) and the performance of young naturalists.

In addition, for children will hold a quiz with prizes “Everything about the elephants,” master class on making elephants from plasticine, play with clowns. Throughout the day, visitors can have a look at the photo window “Amazing Elephants” near the building of the zoo administration.

Beginning of the holiday is at 11:00 am near the House of the elephants. 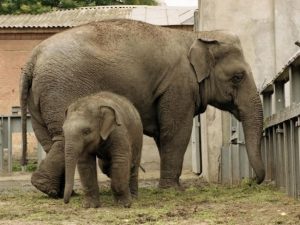 BACKGROUND: Asian elephants are represented only in three zoos in Ukraine – Kharkiv, Odessa and Kyiv. Kharkiv zoo was the first, where Asian elephants appeared in the enclosure in 1925. Now there are two elephants at the zoo – elephant Tandy, which in 2000 was brought from Odessa, and elephant Aun Nyain Lei, which in 2002 was passed from the Dutch zoo in the framework of the “European zoos program for the preservation and breeding of endangered species of animals.”

Feel free to check our recent posts on topics: How will Kharkiv Zoo change?, Kharkiv Zoo to get major overhaul and Funny Weekend for Kharkivens will be held in the zoo.