Festival “Kharkiv Siren” was launched on May 17, Kharkivdozor informs (RU). 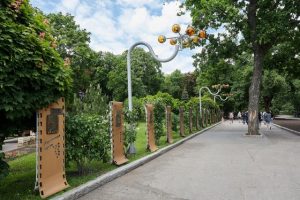 In the Shevchenko Garden on Walk of Stars appeared 5 new stelas with palmprints of famous domestic and foreign actors: French Michèle Mercier, American B.J. Worth, Ukrainian Alexey Kolesnik and actresses of the Soviet cinema and theater Svetlana Zhivankova.

“Guests of our festival left in Kharkiv their souls, hearts. And thanks to stelas anyone can touch the works of actor, director, putting the hand in handprint. It has become a tradition,” said the head of “International Film Festival “Kharkiv Siren” Victoria Marenich.

The guest of this year’s festival was Alexey Kolesnik, who received the prize of the International Festival “Golden Knight” for best supporting role.

“I have not even imagined that three years later I find myself in this place. Let this avenue expand and new guests come to Kharkiv,” said Alexey Kolesnik.

The organizers expressed hope the event will continue to be held in Kharkiv. 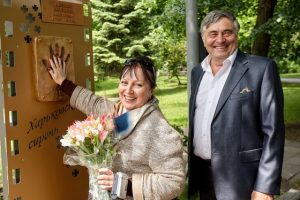