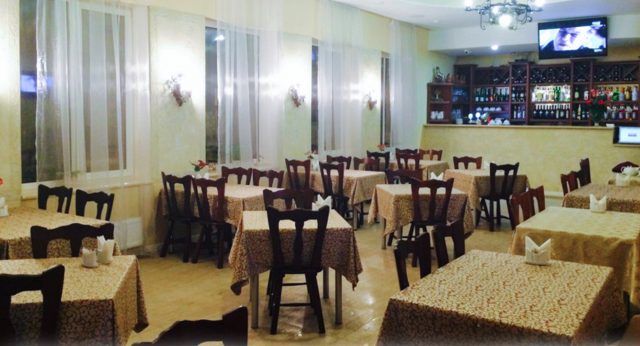 Menu. The restaurant offers 3 meals (soup and salad + main + drink). The two dishes to choose from every position. Dessert is not included in the price. Unfortunately, we could not choose a salad, because we came at the end of lunch time, and the number of servings is limited.

(!) Those, who came before, were lucky ones as they could order the potatoes on the grill (brazier) instead of the dumplings and radishes in sour cream instead of pickles.

– Salads. Pickles were delicious, like homemade, moderately salted and spicy. We got sliced green tomatoes and cauliflower. Be careful, there could be hot pepper.

– First course. Shurpa (a mutton soup) was very rich and included vegetables, potatoes and a piece of bone with fat = (it would be better if it was meat …) In general, satisfying and delicious. It’s nice that the cold milk soup (okroshka) was with meat, not sausage as sometimes restaurants do so to save money on ingredients. It was unusual to meet radish in it, but this did not affect the taste – it was good and refreshing.

– Beverages. We got tea and uzvar. Uzvar was like diluted, the taste was not rich. Tea also did not satisfy the level of the restaurant, the usual bag of cheap tea. So we had to order additional drinks. Mulled wine was sour and very strong, milkshake had a nice taste, and grenadine added an interesting gustatory nuance. – Dessert. Cheesecake is suitable for the sweet tooth – even too sweet. Served with chocolate and honey. We were pleased with the restaurant-type presentation.

Service. The waiters are attentive, meals were brought and taken away very fast despite the fact that the feast was prepared and the staff needed to serve the table.

Interior. The restaurant one room with, light and airy. Many paintings, iron chandeliers, there are chairs and sofas. But in general – it is not the level of the restaurant looks like an ordinary cafe-dining room, there is a feeling of some Soviet atmosphere.

Type of cuisine. Caucasian, Ukrainian, European. Many dishes on a brazier and a large wine selection.

Music. The Georgian and Ukrainian music

Smoking. Prohibited you can smoke on the summer terrace.

It is VERY CHEAP here! This is the cheapest lunch and at the same time a hearty one. Meals are delicious but far from gourmet. However, if your goal is to have a rich meal – you are welcome here. We haven’t ordered brazier meat dishes from the main menu, but the prices are encouraging, for example, 200 UAH for a set of sausageы (1 kg), pork chop on the bone – 70 UAH (300 g), lula kebab – 30-50 UAH (200 g).