Pope Francis received a group of Ukraine and Belarus workers on April 20 who had worked on the clean-up of the Chernobyl nuclear power plant, Kharkivdozor reports (RU).

In an audience with the pontiff were about three dozen people from Kharkiv, Dnepropetrovsk, Chernigiv Kyiv regions, as well as from the cities of Belarus. The trip was organized in the framework of the program “For the future after Chernobyl and Fukushima”.

The trip was organized as part of the program “For the future after Chernobyl and Fukushima”. 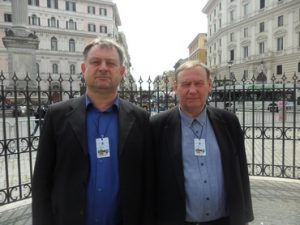 The Kharkiv group was the most numerous and flew to the Vatican by plane. Among them was the chairman of Lozovsky association “Chernobyl Union of Ukraine” Alexander Dyachenko.

During the conversation, Pope Francis spoke about the consequences of the disaster for Ukraine and Europe. The main topic of conversation was nuclear power plants, while Europeans were urged to adopt new eco-friendly energy sources. 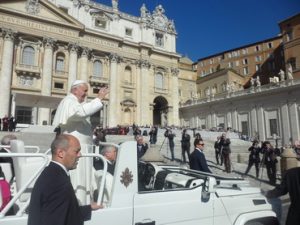 “We are grateful to Pope Francis for the fact that he drew attention of the world to the Chernobyl disaster and its victims, because even after 30 years, the consequences of the explosion continue to affect,” said the head of Chernobyl Union from Kharkiv Anatoly Gubarev.

In addition to an audience with the Pope, Chernobyl cleanup workers had a few excursions around Rome.

BACKGROUND: European Memory Week “For the future after Chernobyl and Fukushima” was held in 14 countries. Ukrainian liquidators had the opportunity to visit Norway, Spain, Germany, Poland and England.

We also recommend you read Anniversary: 30 years after the Chernobyl disaster, Kharkiv to remember Chernobyl and Fukushima and The premiere of the film about Chernobyl by American director will be held in Kharkiv.