Marina Kekhter is a well-known Kharkiv poetess (RU) with German roots, singer, Honored Artist of the Crimea, semi-finalist of the contest “Ukraine Got Talent 2010”, active social activist, crisis psychologist and volunteer. Today Marina shared with us the secrets of happiness.

– Marina, you are considered as a strong person, and would you like to be a weak woman?

– I have the strength of mind, character and inner sense of freedom due to which I don’t agree on any compromises that, I believe, break some valuable things in me. That’s why I’m considered to be strong. For me, such things as freedom and justice are very important. My family probably has a strong line and inside I feel my right to this freedom. I think it somehow concerns the Ukrainian land. Here people have a greater sense of freedom and justice, greater sensitivity than Russians do.

– You were born in Kazakhstan, why did you choose Kharkiv?

– I came here 28 years ago, in 1986. I graduated the institute in Kazakhstan and there was the reason why I couldn’t stay there. When I am in an extreme situation, I choose the solution intuitively. I am a choirmaster, and I was looking for a place where polyphony is born, so it was Ukraine. I chose Kharkiv on Atlas for the 6th grade, arrived and all my life was thinking that I’ve chosen it myself. 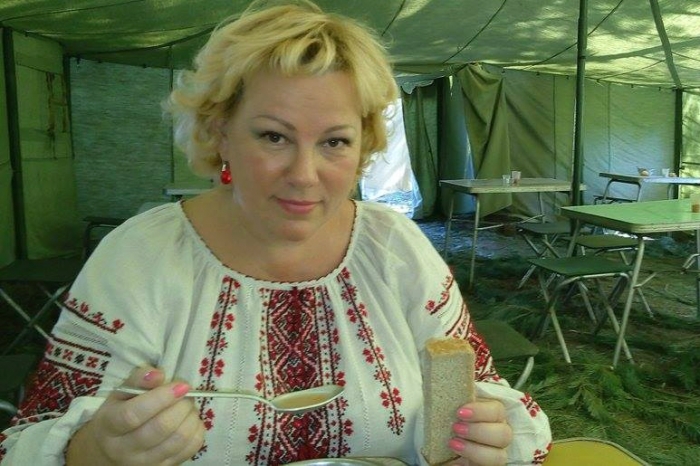 I lost touch with father’s side after my parents divorced when I was six. But two weeks ago my father’s younger sister  found me and told that my ancestors came from Kharkiv. When Catherine-II inhabited the Volga steppe, she invited the settlers, my ancestors from mother’s side departed from Germany, and from Kharkiv province went relatives from the father’s side, they settled on the border of the Volgograd and Saratov regions, and formed a village Kharkovka. It turned out that in childhood my grandmother often nursed me, and she sang Ukrainian songs, spoke surzhik. I don’t remember anything. For me it was a discovery! I thought that I just love good music (laughing). I understood a lot of things about myself and why this spirit is inside me. Now I have a feeling of back, in psychology it means the feeling of parents, tribal forces. Now I feel even more strongly. 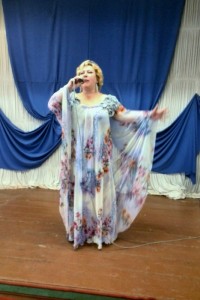 – You are a singer, poetess, psychologist and what else you can add to this list?

– I’m a good choirmaster. I have been working for 7 years in the School of Arts, 2 years was the regent in the church. I miss chorus up to now. I am a chief of the Psychological Support for ATO veterans and don’t know what would they say, but I intend to create a choir there. I know how healing power of the voice is. I came on stage not because I was singing since childhood. It was the opposite, I was told that I won’t sing. But in a difficult moment in my life, I began to realize that I need to change something in my life. My way was the word, voice. And always, when I felt bad, I wrote myself out and felt relief. So I decided to come on stage and tell what hurts my soul.

– Tell us, please, about your volunteer activities.

– I am a certified gestalt therapist, master of psychology, now I study cognitive-behavioral therapy. When the fighting broke out, we started with a group of psychologists to work at the Kharkiv hospital as volunteers. I worked with the soldiers after Ilovaysk, in 92th troop on the preparation of men to the ATO, worked in military units, plus worked with people who came back from captivity. We had to learn a lot and fast, for about 2 years I passed a lot of trainings and internships. Volunteering took such an important place in my life that it gradually superseded everything. Now we think how to organize the workflow, because today the psychological services remain mostly behind the volunteers.

– How do you manage to combine all your activities?

– I just don’t know how to relax in the normal sense of the word. The maximum that I can stand on the sea ​​10 days, but the last three days is torture. I’m not a “holidayer” that just sunbathes and enjoys it.

– It’s a natural state. I think if all the people were involved in creativity, there would be no wars, there wouldn’t be such terrible persons as of today Putin, who had unhappy childhood. For me, as a psychologist his pathology is absolutely clear. If you look at the actions of any authoritarian politicians, you will notice it. Art – is a normal, natural state of the body, through art the body can process the things that traumatize, and turn them into development. Now there are a lot of directions in art therapy. The dance, song come and accompany humanity at all stages of its development. Many things would be more harmonious in our lives if art has become a way of life for the vast majority of people.

It’s a pity when you look at politician, clearly see all his faults and understand that a few sessions at a therapist and it wouldn’t be so many problems for the entire nation. This also applies to our politicians with their inflated narcissism and cultivation of hypertrophied demonstration of material well-being, which actually shows the compensation of some complexes.

– A question for you as to a psychologist: is there a chance for humanity to stop self-destruction? 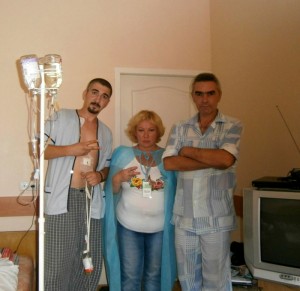 – It’s very topical issue, because Ukraine has never been so plunged in the need to understand some basic things. The war changed a lot of people and affected everyone, wanted we or not. Someone started to steal even more. And someone gives away the shirt off back. After speaking with fighters, who went voluntarily to defend our country, I see a revival of the people’s spirit which was weakly expressed in the last decade after years of repression and destruction. And I lay hopes on these people who returned from the ATO.

Now we need to curb corruption. Corruption is everywhere, in every cell of the body of our currnt state. Corruption is the absence of psychological care to soldiers, for example, because the money allocated for psychological rehabilitation, have been spent on nothing except psychological rehabilitation. Corruption is when people put in terms that if they don’t steal, they won’t survive. Corruption is when we have a minimum standard of living, which can’t cover even heating. The resistance shouldn’t be only on the level of slogans, each should do at least a little thing in this direction. I understand that not everyone likes to fight, it’s easier to adapt to the system. But the system is so sick that it will ingest those who adapts to the system at first.

– Do you regret about anything in your life?

– I probably regret that I’m just “one”. It seems to me that it would be possible to make even more, if not my fears, struggle with myself. But then it would be another life. If I went on stage with a trained voice, I wouldn’t have to suffer so much to find the voice. I couldn’t show other people this way to the voice (Marina for many years successfully conducts training of public speaking, where works with the psychological blocks and voice). I regret exactly to the moment, when I start to imagine what if things were different. If everything was easy and simple – there was no me like I am. So I don’t regret anything. At each point of my life I have fought for myself and my values. I don’t betray myself.

– Do you plan to hold any events in Kharkiv in the nearest future? 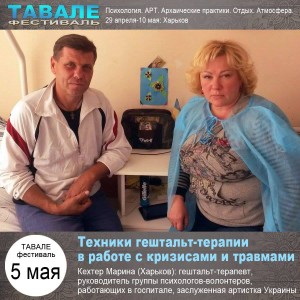 – I will participate in Tavale Festival as a psychologist. As a member of the jury and guest will sing in the city Gorodnya of Chernihiv region at the festival “Soloviyina Rodyna”, on March 23 in Poltava at the International Festival of National Cultures Sunflower Fest -2016, I also sing as an honorary guest. The rest of time I practice as a psychologist and volunteer.

I think on transferring volunteering into another direction, so it will be lots of work on creation of the non-governmental rehabilitation center. The system of Ministry of Defense and the Ministry of Health is such that to create something “healthy”, with modern knowledge of combat trauma and posttraumatic stress disorder (PTSD), with the assistance of the best specialists with the experience of work with our soldiers and the understanding of the situation in Ukraine, is very problematic. Therefore it’s necessary to do something apart from the state, because the state system is stuck in the processes of corruption and stagnation. There is a war in Ukraine, and there is a need of fast and flexible problem-solving system. This has led to the appearance of such a unique phenomenon as volunteering in Ukraine, where it’s not just aid to state, like in other countries, but the work where the state doesn’t work. Hope we will be able to force the state to carry out its responsibilities which we pay taxes for.

– Do secrets of happiness exist? How to overcome negativity and stay positive?

– I’m studying an interesting course in psychotherapy – cognitive-behavioral therapy. The first thing I noticed is that we can control our emotions ourselves and consciously choose the positive.

I observed wounded soldiers and noticed that those who have a strong spiritual component are religious people, they really recover faster than those who believe in nothing. Thought is material and for me as a psychologist it’s obviously because the thought is the base of all psychosomatic outpourings.

If you want to be happy: 1. Learn to understand yourself 2. Work hard to make your life positive and happy. In our current situation all I can say is believe in a positive, believe that good wins. This is not for children, it’s for adults. And do something for it.