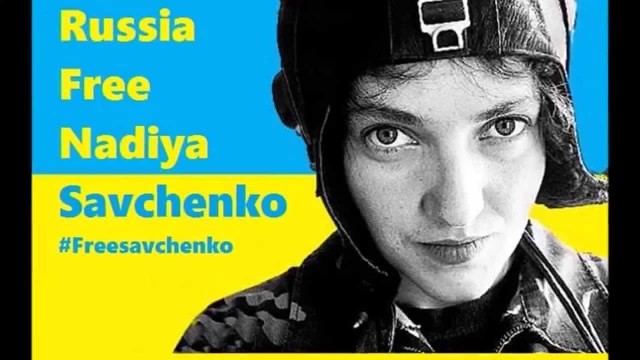 Today, around midday near the Russian consulate at the Maksymilianivska Street (previously Olminskogo) people began to gather under a term-less picket to support a pilot Nadya Savchenko.

The picket has being lasted for the fourth day and now 200 people guarded as many policemen brought together to support Nadya Savchenko and political prisoners’ families.

“This action should be term-less, we have to stay as long as necessary, at least until the sentence,” said the organizer of Ivanna Skiba-Yakubova.

The activists held Ukrainian flags and posters with a demand to free Savchenko. They also gave passerby roses with ribbons and FreeSavchenko slogans, sang the Ukrainian anthem. On a peaceful meeting people mentioned all the political prisoners being illegally held in the occupied territories and in Russia. Today in various cities of the world protest actions in support of Nadiya Savchenko are taking place, during which people call on the Russian government to immediately free all political prisoners

Recalling that the aviator announced a hunger strike on March 3 after the court has not given her to come up with the last word, and rescheduled the hearing for March 9th. At the moment, she is at the Russian custody.