Brunettes Shoot Blondes literally woke up famous after the release of the video for their track Knock Knock collected nearly 9 million views on the Internet and won the category “Best Conception” at the Berlin Music Video Awards.

They have outranked such artists like Hozier, M.I.A., Ibeyi, while the video was shown in the cinemas of 80 major cities in 29 countries, and at the Tres Court International Film Festival.

After that, the band released their debut album, gave 100 concerts in Ukraine and Europe, and took part in the national selection for Eurovision 2016 where deservedly they reached the final! 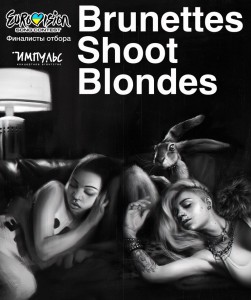