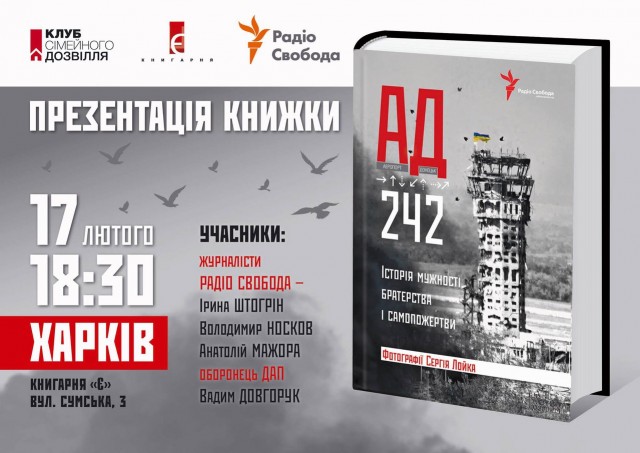 February 17, presentation of the book about the Donetsk airport defense “Hell 242. The history of courage, brotherhood and sacrifice” will be held in “Knigarnya E”.

“The book “Hell 242” – a true almanac about the defense of the Donetsk airport, or Hell, as it was called by defenders of the airport, who received the name “cyborgs” – according to a report on the event page on Vkontakte.

Journalists of “Radio Svoboda” started collecting stories of airport defenders since May, 2014. Journalists gathered unique material: more than 100 interviews, dozens of exclusive photos from the scene, including a photo of participants of Defense and the world-famous reporter of “Los Angeles Times” – Sergey Loiko.

Recall, the correspondent of the American newspaper “Los Angeles Times” Sergei Loiko in the midst of the battle for the airport spent a few days together with Ukrainian soldiers.

We also recommend to read other articles: Memory of “cyborgs” was honored at the airport “Kharkiv” and In Kharkiv presented stress-relieving book.