The representatives of the Ministries of Foreign Affairs of the countries of the European Union examine in Kharkiv the prospects of Ukrainian cities after the signing of the Agreement on the association of Ukraine with the European Union, reported the press service of the city council.

The project “Eastern Partnership” initiated by the Ministry of Foreign Affairs of the European countries explores the possibility of Kharkiv after the entry into force of the Free Trade Agreement with the EU and signing of the Association Agreement. This was discussed at a meeting of representatives of the project with Kharkiv Mayor Gennady Kernes. 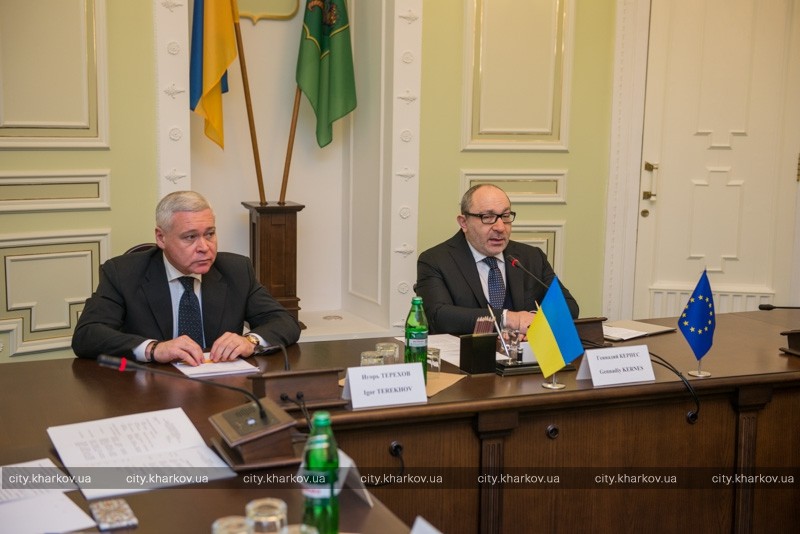 “Our task – to inform the regions about the opportunities that have opened for your business and local government in Europe, about emerging markets accessible for you now and new formats of cooperation,” said the representative of the Netherlands Ministry of Foreign Affairs on the Eastern Partnership Dir Jan Kop.

According to the Kharkiv mayor, local councils in virtue of their powers are working on creation of an attractive investment climate and infrastructure projects that are of interest for European financial institutions.

“We are not a regulator on the export market but the city creates an environment for investments, preeminently infrastructure environment. In addition, we are selected by the World Bank and the European Bank for Reconstruction and Development for the implementation of several projects in the field of heat power engineering, water treatment and transport. It is referred to about hundreds of millions of euros, and this is an example of mutually beneficial cooperation with the EU as for other cities of Ukraine as well as for European lenders,” said Gennady Kernes.