Last night at the checkpoint “Georgievka” in the area of the​​ ATO Kharkiv border guards prevented  smuggling of the amount about 1 million UAH to the territory being beyond the control of the country, as the press service of the State Border Service reported.

Two citizens of Ukraine, who were traveling by car «Ford», transported the money. During the control at the checkpoint, the Kharkiv border guards who are now on the strengthening in the area of ​​the ATO, decided to check thoroughly the car.

As a result, among the personal belongings 990 thousand UAH was found. The circumstances of the incident will be find out by representatives of the Joint Mobile Group, which the citizens and means were transferred to. 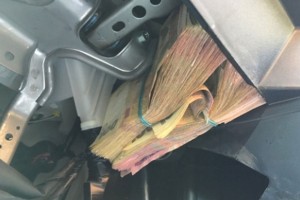