The crew of the TV programme “Inspector Freimuth” visited Kharkiv waterpark “Jungle” and made a disappointing verdict.

The revision began with the fact that TV crew was held off despite they bought the entrance bracelets so they had to squeeze themself under the pay-gate.

Olga Freimuth was surprised that in the area of water activities where there are also children, they sell beer. The link lady asked the barman if the waterpark had a license for alcohol retail trade. All the documents were in order.

The staff closed the entrance to the kitchen for the crew therefore the inspector didn’t get a chance to evaluate the cleanness. Freimuth just checked the temperature where the salads with mayonnaise were kept. It was + 26 degrees.

But the main task of TV workers was to check security on the slides and swimming pools: in October 2011, ten-years-old boy was nearly to drown here and despite the efforts of doctors he died in hospital. 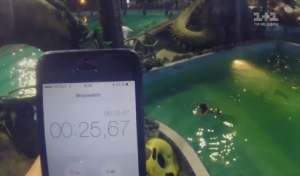 The crew conducted an experiment: a young professional swimmer simulated drowning for 30 seconds but none of the rescuers responded. A second attempt was successful – the girl was rescued but it was a visitor of the waterpark. “I screamed, but nobody paid attention to me. There were no instructors on the sliders,” said the girl. 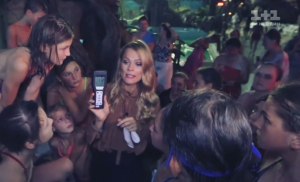 The purity of the children’s pool roused censure of Freimuth. Her mini-laboratory showed the indicator “112” at the maximum permissible “10”.

Following the results of the revision Freimuth rendered the verdict: “I don’t recommend the waterpark “Jungle” neither friends nor enemies.”

Reference. “Jungle” is one of the most popular waterparks in Ukraine. The total area of ​​the waterpark is 11 thousand square meters.

“Inspector Freimuth” is the author’s project of Olga Freimuth in the genre of reality show. The link lady, known advocate of the consumers’ rights, checks popular food outlets.