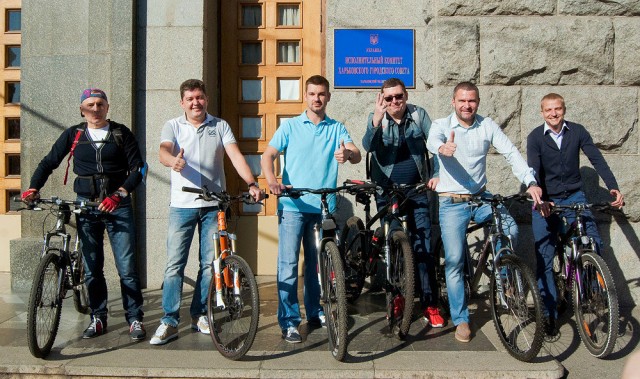 Yesterday, on the 18th of September, officials and deputies of the Kharkiv city council supported the campaign “bike to work”, which took place within the European Mobility Week.

The following officials could be seen cycling: Director of the Department of Sports Image Projects and Marketing, Oleksei Chubarov, Deputy Mayor for the city’s infrastructure, Eugen Vodovozov, deputies of the city council, Gabriel Mihajlov and Andrei Bondarenko, Chairman of the Administration of the Leninsky district, Maxim Museev, and Director of the Department of land relations, Boris Baronin.

“We can create a lot of bike paths, build infrastructure, but if we do not build up the culture of driving, it will not help. I saw blocked bicycle paths by parked cars in Kiev. But I am confident that, over time, we will overwhelm this culture. Earlier, cyclists in Kharkiv were in low numbers; now, there are many, and I’m heartened with it,” said Eugene Vodovozov.

Recall that more than 50 cyclists have gathered near the Mirror Stream.