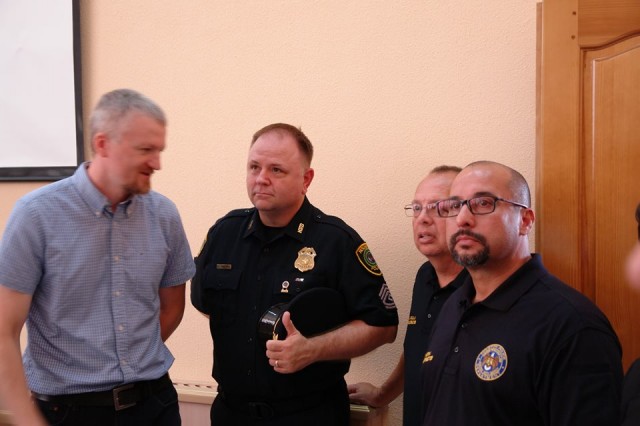 In July, The Kharkiv Times already reported on the progress with implementing the national concept of the police force in the Kharkiv region. The sources we referred to all communicated the fact that, in spite of the Law on the Bodies of Internal Affairs and the Law on National Police only having been adopted in the first reading, their principles are already taking effect in Ukraine’s megapolises. In Kharkiv, the regional police office have already begun dispensing with the office of the traffic wardens and The concept is that new patrol guards must be competent, well-paid, incorruptible and civilian-friendly. Yet, at the core of their competences is the ability to effectively clamp down on street crime and terrorism. For a positive shortcut on the learning curve, the Kharkiv University of Internal Affairs have invited officers from Houston, Texas, to share experience on handling both the daily routine of patrol work and extraordinary tasks.

Sgt Pinkerton and fellow Texan policemen are part of a 5000-strong police force who patrol the streets of 3-million-large Houston. Being able to learn from them is essential for Ukrainian would-be patrol officers. Coming from diverse backgrounds not necessarily including work in law enforcement, they have pledged to be honest and fair – but essentials such as use of firearms, approaching a suspect and maintaining eye contact are equally important to their service.

The commitment to a reformed police was backed up with a recent visit to the University of Prime Minister Arseniy Yatseniuk, Minister of Internal Affairs Arsen Avakov and his Deputy Eka Zguladze. They are optimistic for the full launch of the reformed police, which is scheduled for September 19 in Kharkiv. In the meantime, new recruits will undergo a vigorous training. The first results in Kyiv are impressive despite some setbacks – for example, the time to arrive at the scene of a traffic accident has dramatically fallen from 30 to 9 minutes.