Home Culture Kharkiv Gorky Park among the best in Europe

Maxim Gorky Central Park for Culture and Recreation in Kharkiv took 16th place in the ranking of the top 25 amusement parks in Europe, reports Korrespondent (RU). 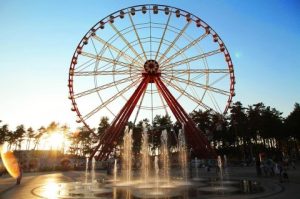 According to tourist portal TripAdvisor, in the ranking of top 25 European amusement parks, Maxim Gorky Park which is located in Kharkiv took 16th place.

Visitors of the website have praised Ukrainian sightseeing, and in a short review called it “a fairy tale in the metropolis”.

“Awesome for all ages. This was my first trip to Kharkiv and despite mixed feeling of the city itself, this park was an amazing surprise – clean, modern and spacious with activities for people of all ages. Visited June 2016,” left the review one of the visitors from Barcelona (Spain) aLucky.

Among entertainment parks in Europe on the first place is the Europe – Park, located in the German town of Rust. The second place is occupied Tivoli Gardens in Copenhagen, Danish, and the third – Historical theme park Le Puy du Fou, in Les Epess in France. Five leaders close French Disneyland in Paris and the Spanish PortAventura.