Previously the lost and found departments work in the metro and a tram depot. But over time, it came to naught.

For the “foundings”, the patrol police made a separate cabinet. “People lose different things: mobile phones, pension and student certificates and other documents, car license plates, even a motorcycle helmet and radio of Soviet times,” said a spokesperson of Kharkiv patrol police, Yaroslav Borisov.

All the finds are accepted according to the procedure: police officer writes a report, drawn up the inventory of found objects, indicates the place where they were found.

“Passports with the appropriate report, we immediately pass to the migration service. If this is a mobile phone we call around the nearest people of the owner from the phone book. The owner has to come with documents on this phone, passport. About other found objects we inform citizens in announcement on regional TV channels. In addition, on our Facebook page we write the information,” described Borisov. 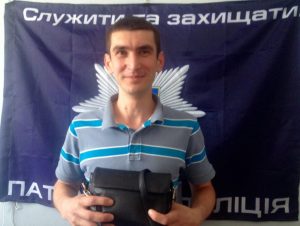 On the message that the lost item was found and it can be taken back – people react, usually the same.

“They do not believe – think that it is swindlers. Then ask: “How much will it cost?” And are surprised when we say nothing – because this is our job,” told Borisov.