University rector Eugene Sokol said the university will feature artworks from members of the Academy of Design and Fine Arts. 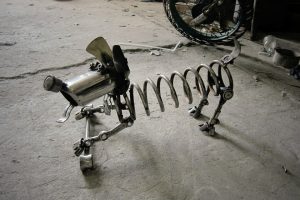 The park will be decorated with sculptures and other objects, made in the style of techno-art.

“When Krasnoznamennaya Street was renamed into Iskusstv Street (Arts Street), the Academy has undertaken to give it a look corresponding to the name. Since it seems to be part of the “KPI”, we have agreed to create a unique image, which does not exist in the world, and call it “Polytechnic garden.” That is, the territory of our university will become a space for the implementation of creative ideas of students of academy,” Eugene Sokol said.

The project “Polytechnic Garden” is now under development. For its part, “KPI” has already proposed to make one of the elements – a three-meter scale model of locomotive.

Feel free to check our recent posts on topics: Kharkiv Polytechnic Institute – a leader of higher education and Kharkiv library of KPI is one of the best in Ukraine.