On May 12, the French Ambassador to Ukraine Isabelle Dumont performed as part of the symphony orchestra of the Kharkiv Regional Philharmonic, playing the cello.

According to Dumont, she has been engaged in music since her childhood.

“At the age of 16, I even doubted if not to do music professionally, but decided to become a diplomat. I continue to make music: I can’t be a soloist but often play in orchestras,” Dumont said. 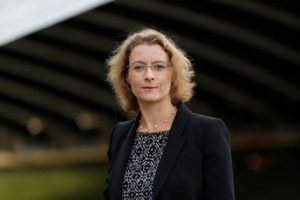 Nevertheless, the main purpose of Dumont’s visit to Kharkiv was the appointment of the new Ambassador Extraordinary and Plenipotentiary of the French Republic to Ukraine Sergey Polituchy who will serve a five-year term as the Honorary Consul of France in Kharkiv.

She noted the choice was obvious as Polituchy is close to France and its culture and has supported “Alliance Française” for many years. The new honorary will have lots of responsibilities but the priority is to protect the interests of French citizens and develop international relations.

“This is a very important day for me. The French Honorary Consulate has been opened in such a big city like Kharkiv, I believe our relationships will become even closer,” Dumont believes.