On April 9 Kharkiv hosted III International Marathon, which was attended by more than 10,000 people from 26 countries.

Moreover, 500 persons ran relay (4×10,55 km, 2×21,1 km), and about 3,500 children participated in children’s races, according to the director of the department of sports projects Alexey Chubarov.

Also there were an American football and Nordic walking teams among the participants Traditionally mothers with baby carriages also ran the marathon. 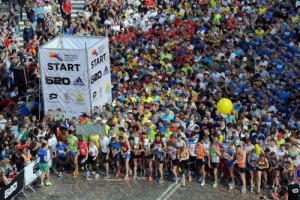 Among the participants there also were people with disabilities. Kharkiv’s wheelchair user, Dmitry Vasiltsov, not for the first time takes part in such competitions. That day he set a goal to overcome the distance (42,2 km) in 2 hours 52 minutes.

“Great, I’ve broken my personal record. I want to note that the level of our marathon is growing, the organization became better. This year, the marathon has collected more than 10,000 participants, many guys from the military high schools, being very well prepared, complicated the race,” Alexander Popov said. 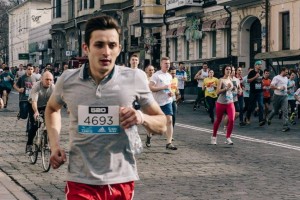