A march for women’s solidarity against domestic violence and discrimination was held in Kharkiv on March 8.

The action started at Pavlivska Square (previously – Rosy Luxemburg) and activists marched through the streets to draw attention to this problem.

“We wanted to make the problem of violence against women more visible with help of this street action. Unfortunately, today it is common in our society to keep silent about such things, to talk about them in public is unacceptable. Women do not “wash their dirty linen in public” fearing to be condemned,” the organizers said. 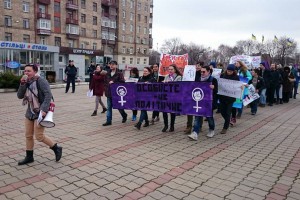 Activists noted there is a dangerous tendency in Ukrainian society to blame the victim of violence. The organizers believe the most important tools to counter violence against women is to disclose the facts of violence.

“On the day of March 8 women usually remind of their attractiveness, femininity, get flowers and candies. We want to show the back of the female fate which is not so bright,” said the organizers.

They believe that to make the problem of violence against women more visible in our society is a must because every third woman at least once in her life had been the victim of violence. 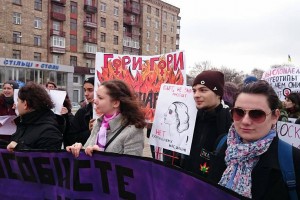