Paralympians in Ukraine are seizing on a new Western trend for colorful prostheses.

At the Kharkiv prosthetics center, disabled athletes and ATO veterans are picking up the fashion. It is a first for Ukraine.

Striking designs distinguish new prostheses from normal ones: legs may look as if in armor, paintings on hands resemble stylish tattoos. 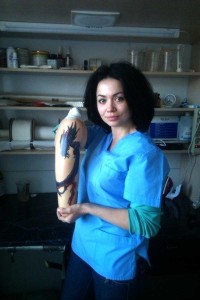 A year ago Natalia Klimenko headed a commercial bank department, but today, she creates unique prostheses in the center “Biosculptor”. Natalia herself has changed several prostheses as she hasn’t had a hand and forearm since birth.

She eventually became a model for artificial limbs, took part in photo shoots, and then decided to dedicate her life to helping other people who have no limbs. As a result, Natalia and her colleagues decided to make not only prostheses, but goods with individual features.

The first man who tried a new prosthetic was the head of the regional center “Invasport” and champion of the Paralympic Games, Nikolay Ovcharenko. He lost his leg while serving in Afghanistan in 1983.

He ordered a prosthesis with an emblem of Ukraine and the symbol of the Paralympic team.

“I’m an athlete, that’s why all the paintings related to sports and national symbols. It was my idea. Anyway I use prosthesis so why not make it patriotic, beautiful and elegant.”

ATO veterans saw the athlete’s unusual prosthesis and wanted new ones, too.

Ms Klimenko commented: “The cost depends on the work complexity. The state budget covers 90 percent of the cost for ATO veterans, so it’s big money. For example, the production costs of a knee mechanism is 380,000 UAH. We hope money from the budget will come soon as last year funds were allocated in May.”

Meanwhile the studio is developing special paintings that can be put on and off prosthesis, like clothes. Natalia also dreams of realizing a wedding series: an artificial beaded arm or artificial leg in the form of beautiful stockings with a garter!