“League of Laughter” is a TV humorous show where teams or single comedians compete in comedy performances on a TV channel 1 + 1 supported by Studio Kvartal-95.

“Slobozhansky League of Laughter” (Kharkiv) is an official subdivision of Ukraine’s humor championships.

On March 14 only the best comic collectives, who give a sea of ​​laughter, fun and joy in the struggle for the right to get into the season 2016, will come on stage of Kharkiv National Academic Theater of Opera and Ballet.

The festival jury will choose the best 12 teams. Those who gain the right to participate in the second season will be under the control of an experienced comedian coach, a member of the jury, and will entertain Ukraine with their jokes.

Various teams without any restrictions on the format can participate in the competition. About 25 teams have filed applications for the participation.

Viewers will be able to see performances of favorite teams “These guys”, “Bachelor in Syzran’ and teams from Poltava, Khmelnytsky, Sumy and Kharkiv as well. 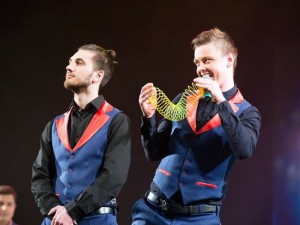 The founding fathers “League of Laughter” see this show as a Ukraine renaissance of television format KVN (Club of the Funny and Inventive People).

“For a long time Ukrainian funny and inventive guys haven’t had a television space. But under the guise of “League of Laughter” it appeared. The chief principle is to write texts by themselves, and not to use services provided by outsiders,” project editor–in–chief Andrey Chyvurin said.

The first season of “League of Laughter” was attended by 135 teams from 42 cities and towns across Ukraine.