Home Entertainment An unusual type of dating appeared in Kharkiv

An unusual type of dating appeared in Kharkiv: “silent” meetings where the participants express their feelings without saying a word, but with gestures, smiles, or notes. The project for lonely people was organized by Elena Karaseva, who has recently started to build a new life in our city.

Together with her partner, Elena rents a hall for these events, purchases tea, coffee and biscuits. Alcohol at such meetings is restricted. Ten women and men are invited on the “dumb” rendezvous. Immediately they are put into different parts of the hall, and strictly prohibited to communicate. Then the guests seat against each other, romantic music sounds, and a guy and a girl just are looking into each other’s eyes. Every two minutes they change a partner.

“The first reaction is interesting: someone sheds tears, someone laughs, someone shyly looks away. And then they begin to stare and nothing could bring them away. After each meeting they write reviews about their feelings which they had during the meeting,” told us Elena.

The second stage of the dating is psychological games aimed at the disclosure of the individual. “They are already easier to open. I ask quite frank questions but they do not respond them out loud, and exchange notes. Only after that they know names, and in a friendly company begin to communicate. The matched couple goes to the cinema. But even if a couple did not match in the future the guys continue to communicate with pleasure,” Elena added. 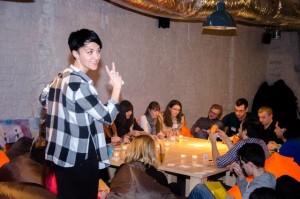