On January 27 the chairman of the Kharkiv State regional administration (KRSA) Igor Rainin met with the delegation of the US State Department.

He noted that with the support of the US Embassy was opened an office of Kharkiv region in Washington. According to Rainin, in March, a delegation of the region plans to visit the US capital, within the framework of the functioning of the office to improve relations with US business partners.

“We received the full support of the future visit by the US Embassy. The members of our delegation – representatives of the Regional Council, businessmen and representatives of companies in the region,” said chairman of KRSA, stressing that the establishment of business relations with the US is important for our region.

“Earlier the foreign trade turnover of Kharkiv region with Russia amounted to 50% of the total volume. Plus the loss of the domestic market: Donetsk, Lugansk regions and the Crimea – it is about 20%. It says that we need to work on the diversification and expansion of markets. We knew it in the beginning, so we avoid a critical loss in the economy. According to the results of 2015, Kharkiv region took the 4th place among the regions of Ukraine for social and economic development,” explained Igor Rainin. 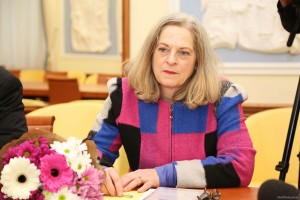 The coordinator of the technical assistance of the US State Department for European and Eurasian Alina Romanowski emphasized that the US government is ready to support the democratic transformations which take place in the Kharkiv region.

“Ambassador Geoffrey Pyatt personally pays special attention to the Kharkiv region. Our task – to help you to resolve the issues the most effectively which you face on the path of the reforms,” noticed Alina Romanowski.