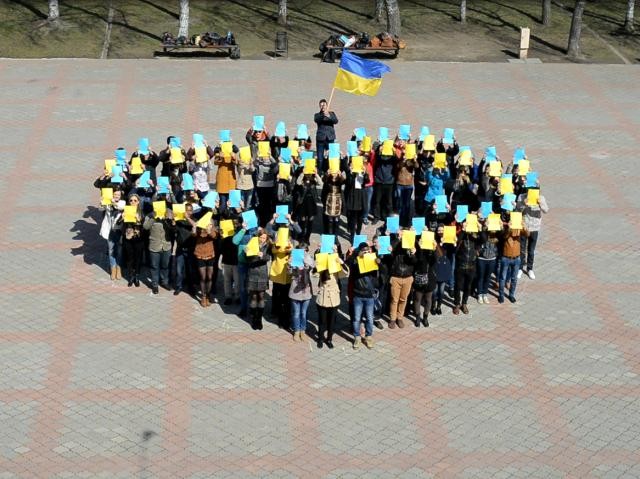 On October 13th, the students from all of the higher educational institutions of Kharkiv launched a patriotic wave “Kharkiv is Ukraine. Ukraine comes first” dedicated to the first anniversary of the Defender’s Day of Ukraine.

According to the Department of Education and Science of Kharkiv Regional State Administration, the event was launched in the format of a flash mob using music and state symbols, attributes, and patriotic slogans. Students congratulated Ukrainian military with the first anniversary of the Defender’s Day of Ukraine and sang the National Anthem.

The best photos and video reports will be posted on the websites of the Regional State Administration and the Department of Education and Science.

The patriotic flash mob is an initiative of the Department of Education and Science of KRSA, the Council of rectors of higher educational institutions, Kharkiv university consortium, and the regional student council.

Recall that the president of Ukraine, Petro Poroshenko, has signed a decree, which says the local governments, enterprises, and citizens’ associations to fly the State Flag of Ukraine every year on the Defender’s Day of Ukraine.

The appropriate amendments were made to the Article 3 of the Presidential Decree as of August 23, 2004 № 987 “About the Day of the State Flag of Ukraine.”